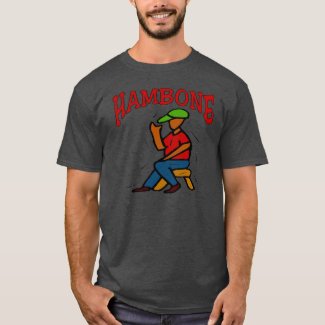 Hambone Hambone pat him on the shoulder
If you get a pretty girl, I'll show you how to hold her.
Hambone, Hambone, where have you been?
All 'round the world and back again.
Hambone, Hambone, what did you do?
I got a train and I fairly flew.
Hambone, Hambone where did you go?
I hopped up to Miss Lucy's door.
I asked Miss Lucy would she marry me.
(in falsetto) "Well I don't care if Papa don't care!"
First come in was Mister Snake,
He crawled all over that wedding cake.
Next walked in was Mister Tick,
He ate so much it made him sick.
Next walked in was Mister Coon,
We asked him to sing us a wedding tune,
Now Ham-....
Now Ham....


Hambone from Wikipedia-
"The Juba dance was originally an African-American plantation dance, brought from West Africa by slaves who performed it during their gatherings when no rhythm instruments were allowed due to fear of secret codes hidden in the drumming. The sounds were also used just as Yoruba and Haitian talking drums were used to communicate[1]. The dance was performed in Dutch Guiana, the Caribbean, and the southern United States.[2]

Later in the mid-1800s, music and lyrics were added, and there were public performances of the dance. Its popularization may have indirectly influenced the development of modern Tap dance[citation needed]. The most famous Juba dancer was William Henry Lane, or Master Juba, one of the first black performers in the United States. It was often danced in minstrel shows, and is mentioned in songs such as "Christy's New Song"[3] and "Juba"[4], the latter by [[Nathaniel R. Dett]."