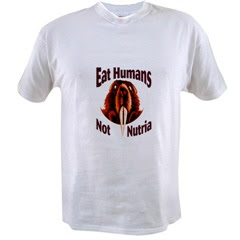 Long before man made concrete paths and brick huts along the bayou small critters lived peacefully along the banks. With the explosion of human beings moving into the once tranquil swamps the locals are being evicted some by gun point. The Nutria are responding with a campaign, of sorts, to get attention to their plight. Asking to move out is one thing but telling people to eat you and being shot at is another. Nutria are now selling shirts and gift items saying, 'Eat Humans, Not Nutria' and more importantly, 'Save The Marsh'. With more marsh land available more Nutria would have a safe place to live. Help the cause, buy a funny shirt see for details, http://www.cafepress.com/figstreetstudio/700091

BULL'S-EYE
Jefferson Parish's unorthodox practice of putting nutria in the cross hairs may be denting the rodent population
Monday, May 14, 2007
By Michelle Hunter

For almost a dozen years now, SWAT team snipers have been hunting the hordes of nutria that have made their home in Jefferson Parish's drainage canals.

See entire article at http://www.nola.com/news/
Posted by Bluecat-NOLA at 7:59 AM Links to this post